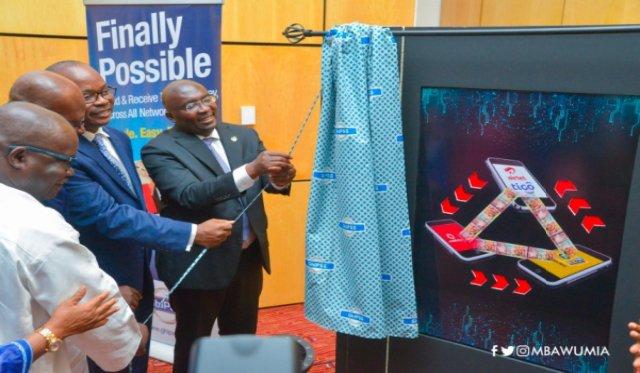 Vice President Dr Mahamudu Bawumia, has observed that one of the greatest enemies of corruption is technology and said the government would embrace opportunities in the technological arena to improve the payment system and enhance the delivery of public services.

He said with the advancement of the Internet and mobile payments solutions, it would aid in tracking and collecting payments due to the government, which would make it more difficult for people to steal money from the public purse.

He said the country was gradually putting the requisite technological infrastructure to ensure efficient public services and fight corruption, noting that, Ghana’s mobile money interoperability (MMI) was unique on the African continent because a client could transfer and pull money across networks and also transfer money from one’s mobile money account to bank account  and vice versa seamlessly.

He said since payment services were pivotal in day-to-day operations of a modern economy, any innovations that facilitate exchange and payment activities could make huge contributions to the overall performance of the economy by creating jobs and adding value to the nation’s outputs.

He said from last year, government had been pursuing aggressive financial inclusion and formalisation of the Ghanaian economy through digitisation programmes such as the paperless ports system, plans to roll out the national identification system this month, issuance of smart drivers’ licences, electronic certification of businesses and digital property addressing system, which would advance its developmental agenda.

Vice President Bawumia made the observations at the launch of the PaySwitch Company Limited, in Accra on Wednesday. He explained that efficient payment system was the heartbeat of every economy; therefore, financial innovative technologies were making it possible to provide efficiently, secured, low-cost and convenient financial services to a large segment of the population who were financially excluded.

These innovations, he said, were securing means of transactions and boosting the confidence in the payment system. The PaySwitch is a wholly-Ghanaian owned payment processing company that provides switching and enables banks, savings and loans companies and telecommunication firms to issue debit and pre-paid cards.

The Company is the only Ghanaian firm certified to do third-party processing for Visa Master Cards in Ghana. Vice President Bawumia acknowledged the contribution of Information and Telecommunication firms for their efforts in finding technological solutions to everyday life and improving the standard of living of the populace.

He said in the era of rapid technological advancement, it would be disastrous for the nation to resign itself to the outmoded method of running the economy since the payment system was the lifeblood of any economy and critical towards the efficient running of the economy. He, therefore, lauded the Bank of Ghana for pioneering various reforms in the financial sector, including the interbank payment systems, E-switch, the GH Link, the Instant Pay and the recent launch of the mobile money interoperability system geared towards making financial inclusion effective and sustainable.

He said in many emerging economies around the world, technological innovations were increasing in the reach and depth of financial inclusion and Ghana could not afford to be left behind.

According to him, the country’s MMI system was more advanced than what was pertaining in other African countries like Tanzania and Kenya. Reacting to the cost of the MMI system, Dr Bawumia said initially, three bidders applied to provide that service with one firm quoting GH¢14 million, the second quoted five million, while the third firm mentioned GH¢4.6 billion.

He expressed surprise that the bidder with the highest quotation won the bid, and noted that, the government upon the assumption of office reviewed the bids and managed to build the MMI system at 4.5 million dollars that saved the nation extra cost for the same scope of work.

Dr Bawumia noted that, if the payment system is properly harnessed, it would transform the Ghanaian society towards a cash-lite economy and propel the economic growth of the nation. He observed that considering the rapid technological advancement in the country’s financial sector, a time would come whereby the government would only accept electronic payments.

Mr Nathan Annobi, the President in charge of Operation at the PaySwitch, in an interview with the GNA, said the Company offered services to financial institutions, insurance companies and retail outlets where people could make payments. He said the firm’s operations had been integrated into all the four mobile money operators in the country to cause transactions across networks and offered comprehensive payment card products and solutions.