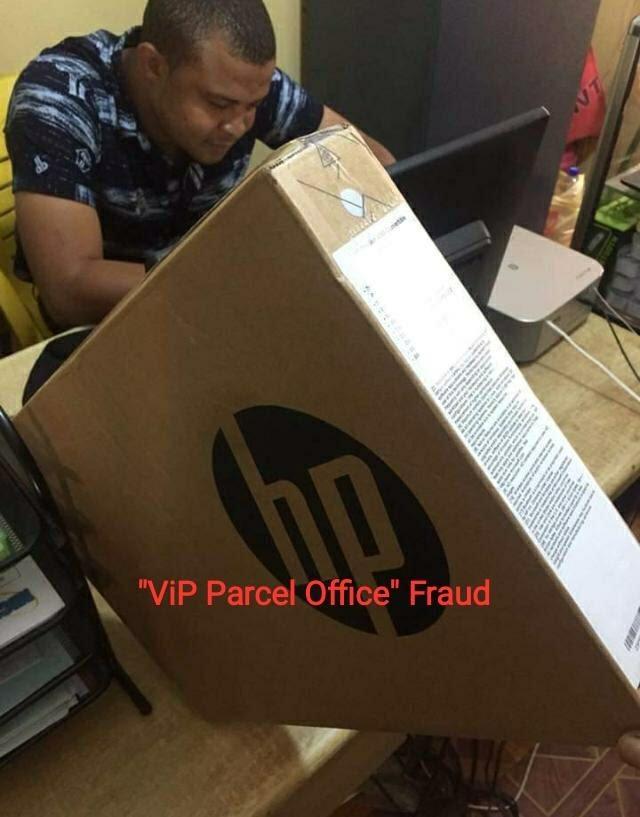 This article was written by an Mfidie.com reader.

On Friday, 14th August 2020, I became a victim of the VIP Parcel Service Fraud and will like to share my experience with the general public.

The intent is to educate the public and create mass awareness of their mode of operation so no one falls victim to it. Also, remember to read our article on staying safe when buying online.

On Thursday, 13th August 2020, I visited Tonaton.com to search for a good laptop deal to use for work. After combing through and filtering a lot of results, I landed on an HP Envy Gaming laptop going for GHS 1050.

Initially, I thought the offer was “too good to be true” so I decided to find out how much it’s being sold by other sellers. To my surprise, a lot of merchants were selling it around GHS 1000+.

I thought they may have gotten a good laptop deal abroad hence the decision to sell at the price and since it was a used laptop that price tag will be fair. (In retrospective, I later realized most of the sellers were using the same fraudulent approach).

Since I was low on cash, I thought it was a good offer, hence I contacted one of the sellers named Sylvester for inquiries.

Ignorantly, I contacted Sylvester via phone on 0261013804 to inquire if the laptop was still available.

He confirmed the availability. Because I say the condition as new, I wanted to be sure it was actually new. He told me yes it was new and it was a promo that is being run by the company hence the low offer.

He indicated that the office is based in Akosombo and not Accra as specified in the ad and he is willing to send the laptop to me through the VIP transit.

I was a bit skeptical knowing it was not based in Accra. However, Sylvester gave a caveat the laptop will be given to the driver of the VIP bus and only upon receipt of the laptop should I make payment to the driver who will intend send the money to him.

I agreed to the proposal and he sent the pictures of the laptop with its specs via WhatsApp it was a new laptop. He requested for a WhatsApp Video call to guarantee the authenticity before bagging it to VIP bus terminal.

What Happened At the VIP Bus Terminal?

After the video call has ended, he informed me he was going the VIP Parcel terminal to send the laptop, he promised to call me when he gets there so I talk to the driver of the vehicle and take his details.

At the terminal Osofo Isaac claimed drivers were not supposed to handle packages and that the package will have to be sent to the Parcel office to be verified and registered into their system before he can go for it to be sent to Accra.

Sylvester (the fraudster) also called me to let me know the initial agreement of handing over the laptop to the driver was not possible due to VIPs rules so he had to take it to the VIP Parcel office instead.

At the VIP Parcel Office, the item will be booked and verified and a code will be given to me so I give it the driver to claim the package. However, I will need to pay for the cost of the package fee at the office. Knowing that the laptop was being sent via the VIP Parcel office, I felt at ease.

At the VIP Parcel Office

Sylvester (the fraudster) then went to the VIP Parcel office to deposit my package. He called me to inform me the package has been weighed and will cost me GHS 30.00 so I should send him the money.

Not being on MoMo he asked that he approach a Mobile money merchant nearby so I speak to him and send him the money if he agrees to it. I spoke to one Bernard Boateng (MoMo Merchant) on (0551446524) and later send him the parcel fee of GHS 30.00.

Sylvester called to confirm receipt of the MoMo and later confirm making payment by sending me a receipt.

A Call From the Parcel Office

I received a call from the parcel office indicating the parcel has been verified and that it’s an HP Envy Laptop.

The caller then indicated that VIP will pay for the full price of the package if I did not receive my package or if there is any defect on it and so I can hold them responsible for any eventuality (I felt more at ease this time).

He later confirmed my name (I had given my name to the Fraudster to be attached to my package).

A few minutes later I got a SMS . 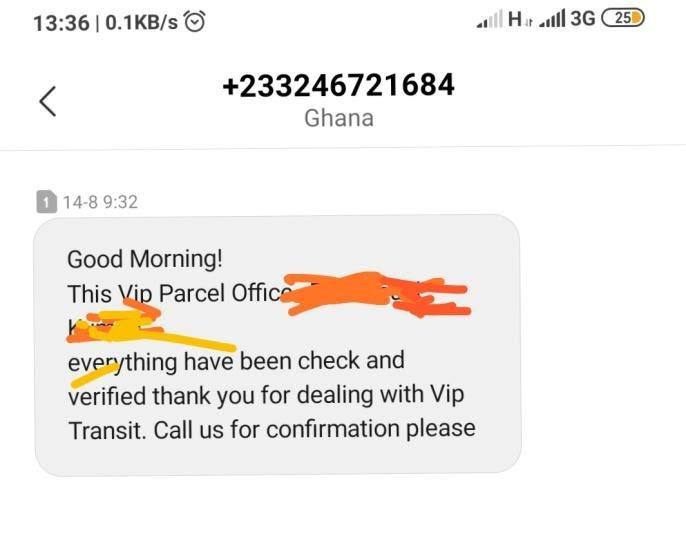 How I was Duped

The office indicated that since they only deal in delivering of packages, they are not in a position to take money from me to hand it over to the Sylvester (the fraudster) when I finally receive the package, hence I will have to find a way of paying Sylvester, mean whilst they can confirm receipt of the package, it is in safe hands and has been verified.

Sylvester then calls me to let me know since the package has been delivered to VIP, he is on the losing end because he is not assured of receiving the money. He sent me the below pictures to confirm the deposit of the package

Picture of Parcel sent to the “Office” registered and verified

Package is Secured At VIP Parcel Office, So What Next?

Since the package has been secured at the parcel office, I needed to inform the driver to go for it. But he can only make claim of it with a Code (written on the receipt) .

The Driver then calls me some minutes later, claiming he is about departing and will need a Code to go to the office to take hold of the package so I need to call Sylvester to send me the Code to be given to the driver (Osofo Isaac).

I called Sylvester then he wanted to know how he will get his money since the package has been secured at the VIP Parcel office. If he hands the receipt code over to me to given to the driver, what guarantees his payment.

I was a bit sceptical (since this wasn’t our agreement) but the driver kept calling me several times (he was departing and I was delaying his departure time).

I called Sylvester again, assured him of getting his money so I will need the code to be given to the driver. After some back and forth conversation, he finally released the code to me (K3004)

I passed it on to the driver, he then called me has gotten the package and is setting off to Circle ( journey will take about 3 hours). I should expect him around 1 pm and he will give me a call once he alights.

Now that I know the package was coming to my destination, I called Sylvester (the fraudster) and he agreed I should send him the money (GHS 1,050) via MoMo to Bernard Boateng (the same person I earlier sent the GHS 30 cedis).

I waited patiently till 1: 30 pm to find the whereabouts of the Driver, he picked the call and indicated he had arrived at Circle and was parking so will call me soon.

After about 30 minutes I called again, this time, he was furious and was asking me why I was pressuring him to answer calls when I knew he was driving and putting the lives of the passenger at stake, he reiterated he will call me when he finally parked.

Eager to welcome my package, I moved to the VIP Parcel office at Circle (it was almost an hour past since I spoke to the driver) to check on the whereabouts of the driver and claim the package from the Parcel office.

I greeted the personnel there an inquired if there is a parcel office for Akosombo, immediately I mentioned the town, the gentlemen look at me and inquired if I had made an online purchase on Tonaton.com. I told them yes.

Sorry, you have been scammed!

He then looked straight in my eyes and unapologetically told me I have been scammed.

I am Not the First, And Won’t Be the Last.

He then narrated to me how I was scammed just to confirm to me it is truly a scam and cited similar incidents of customers walking into the parcel office to make claim of an online purchase which they never get hold on. So apparently, it was scheme they knew.

What I did Next

I still couldn’t believe it so I called the driver, and wanted to know his whereabouts he told me he has arrived at Circle, so I pressed to find out which part of Circle he is now since I am also there (at the parcel office).

He told me to wait for him, I called again and he insisted I should be there waiting. At last, I knew I have been scammed. The only thing I could do was to utter some curses on his life before he finally cut the call.

I got home in a pensive mood , narrated the story to my dear wife , she comforted me and said we should try calling the Fraudster , the line was off, tried the next morning with a different line and he did not pick. Tried the parcel office line, was switched off.

What can be done?

Well I know I will not receive my money again, but sharing my experience will prevent another ignorant person from falling into the same trap.

Share this on your social media platforms so we can be well informed and be alert.

Watch Out and Be Safe