AN EDUCATOR'S VIEW ON THE BENEFITS OF STEM ''I think that if STEM education is emphasized ... students … will be able to create their own jobs even if they don’t get the chance to further their education.'' -- Hene Kofi Adu 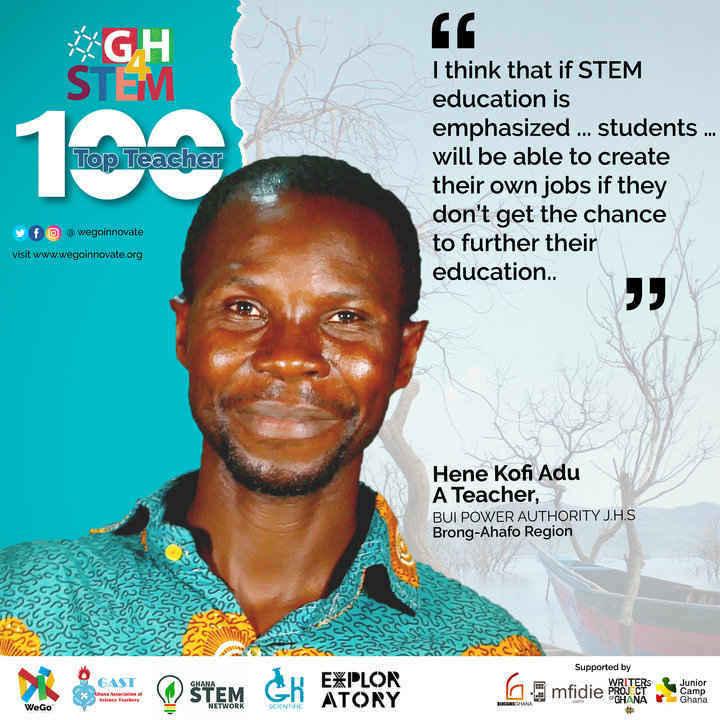 Mr. Hene Kofi Adu comes from Kwasi Buokroma in the Brong-Ahafo region. He attended Jasikan College of Education and continued his education by taking Management Studies at the Institute of Chartered Management (ICM).  He has been teaching for the past 11 years and currently his students number about seventy-eight.

When younger, Hene had various ideas about what he wanted to do as a profession. At a point, he wanted to become a pharmacist, and one teacher also asked him to consider law enforcement, so he then wanted to become a police officer. After getting his degree in Education he wanted to become a manager so he furthered his education with Management Studies. However he finally took to teaching. It was his consideration that if things got tough and he could not get a job in the banking sector, he could concentrate on education and still make it. It turns out to have been a good choice, and he has “made it”: Mr. Hene Kofi Adu is currently the headmaster of his school.

Hene has always loved science, and he was encouraged by his colleague to study science. “I gave it a try and enjoyed it,” he says. He keeps abreast of his STEM knowledge by attending workshops, one of the most recent being the BSTEM workshop held in Kumasi.

Mr. Adu explains that being an effective STEM educator means that he should make the learner feel involved in the learning process while making the teaching interesting and practical. This allows students to understand what is being taught.

Hene also believes that STEM education provides future employment opportunities for students and also encourages entrepreneurship. “They will be able to create their own jobs even if they don’t get the chance to further their education,” he says.

He recounts his most inspiring experience as an educator. It was when two of his students came to him after a lesson. They wanted to create a telescope. Intrigued, he provided them with the required lenses and other materials and challenged them to build it. And truly, they did!  He was impressed. He explains that incidents like this where students demonstrate what they’ve learnt are the high points of his work as an educator.

For their experiment in the JUNEOS Challenge, he and his students worked on a device that could monitor the level of water in a polytank.

Mr Hene Kofi Adu believes that he has benefited immensely from the JUNEOS Challenge. He has grown as a teacher and his students have also become eager to learn science and are serious with their studies. The greatest lesson he has learnt as an educator is that “practice, persistent learning and training makes perfect.”

For leisure, Hene enjoys watching the TV programme Newsfile on Saturday mornings. Though he finds him controversial, his favorite celebrity is lawyer Maurice Ampaw.