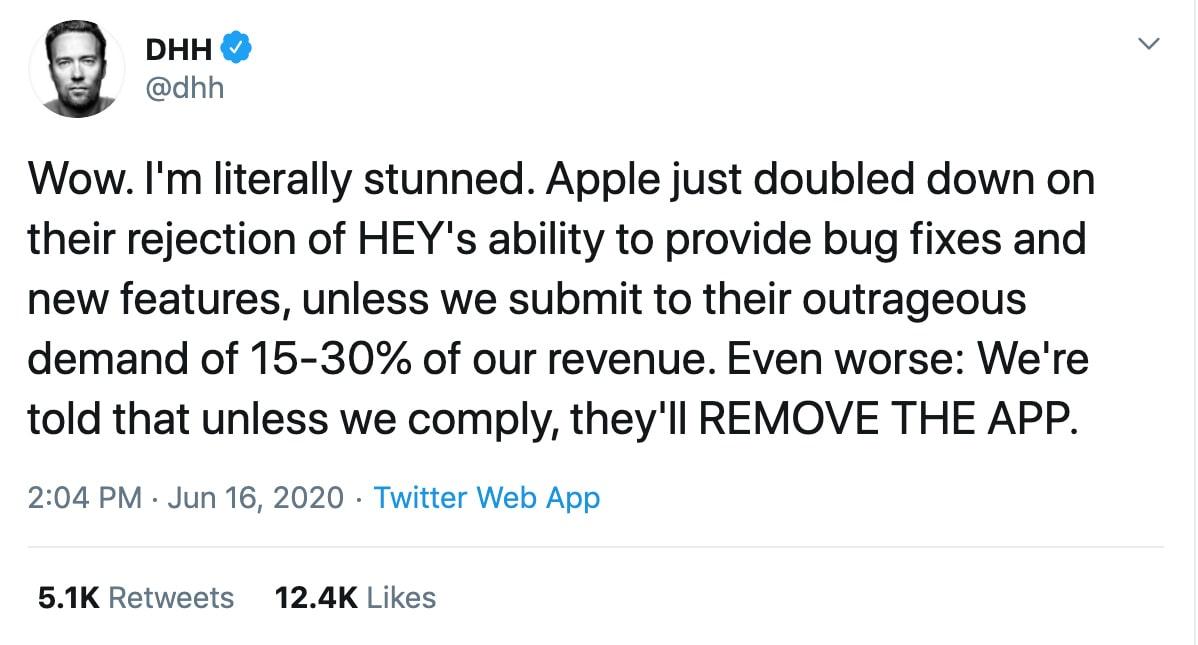 This week, Apple is getting publicly dragged on the internet for insisting on its right to make money from subscription-based transactions on its app store. Surprisingly, Apple is doing this while in the middle of antitrust investigations in the U.S and the EU, where lawmakers are attempting to prove that Apple abuses its power and market position to disadvantage its competitors.

While the complaint isn’t anything new, Apple is being dragged for it in tech circles following their decision to reject app updates from “Hey. This subscription-based email app from Basecamp offers its customers access to their nouveau email service instead of using the standard email protocols on Android, Web, iOS, Linux, Mac, and Windows.

Initially, the Hey iOS app passed Apple’s approval test, but it was put on hold, meaning that the publisher could submit bug fixes or any updates. According to Apple’s letter to Basecamp, the company said they’ll continue putting the app on hold until the publisher adds an option to subscribe to their service by putting an option for an in-app purchase.

On Apple’s part, their decision was met with hostility, shock, and outrage from Basecamp’s Chief Technology Officer and co-founder David Heinemeier. However, Heinemeier has been a hugely vocal opponent of Apple’s policies even before launching “Hey.” As such, that was a bold move for Apple, considering that they’re amid multiple antitrust probes.

In “Hey’s” defence, Heinemeier explained why Apple’s reasoning doesn’t make any sense through a series of tweets. According to the chief technology officer, adding the proposed in-app purchase gives Apple the mandate to take 15-30% of their sales. However, Hey believes they don’t have to do that, despite sharing the platform with Betway and other apps.

Betway is an entertainment app that offers online punters the chance to wager while on the go, with incredible welcome packages. The leading bookie also offers esports offerings, poker, and bingo, offering the most interactive gaming experience in an innovative and secure environment.

Traditionally, Apple has enforced the in-app purchases requirement on applications that allow users to download, read, or stream content. However, developers can dodge that too by leaving out content procurement features. That’s precisely how Amazon Prime Video worked until earlier this spring when Apple allowed the publisher to add their payment system to facilitate in-app purchases. Nonetheless, other applications like the Betway app are still running smoothly on the Apple Store.

Arguably, the whole debacle between Apple and Hey serves as a great bit of high-profile marketing for this new app that might have otherwise gone unnoticed. Nonetheless, Heinemeier’s points have sparked an intense debate on the broader iOS developer community, with many saying that Apple’s policies are a bit confusing and seem to be inconsistently applied.

Some developers also believe that Apple’s policies are anti-competitive, considering that Hey is a competitor for Apple’s in-built mail app. That means the apps main course of business will involve convincing iPhone users to forego apples free email experience in exchange for a differentiated one. As such, Apple insists that the publisher pays a commission whenever they acquire a new user regardless of whether the customer saw the application on the store or somewhere else.