4K TV, 1080p, etc: What you really need to know about Display Resolution 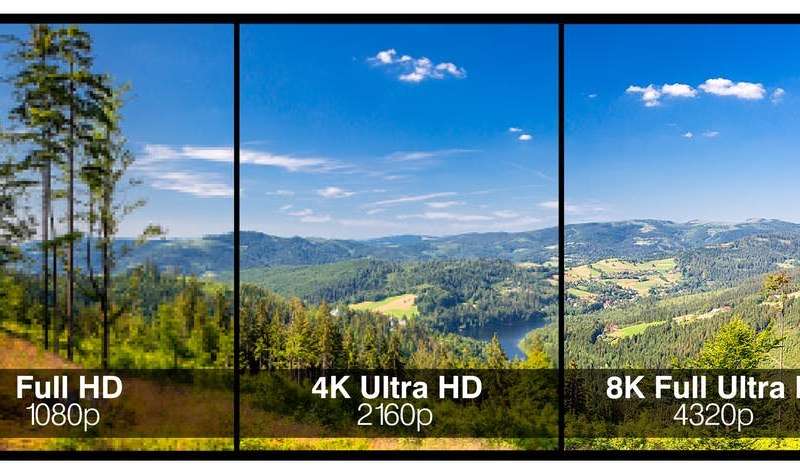 If you’ve been following tech news recently, you have surely heard about how the display is getting better and how the world is moving to 8k and all that. But what do all these stuff mean? Why is 60 fps at 144Hz ideal for gaming on PC? Why does the lower priced iPhone XR have an LCD screen and not an OLED screen what’s the implication on the display?

The two types of screens we mainly use are LCD(light-emitting diode) and OLED (organic light-emitting diode). The difference is simple LCD screens use a backlight to illuminate their pixels, while OLED’s pixels actually produce their own light. Because LCD’s are backlight, the dark images aren’t totally dark whiles in OLED they are dark because the pixels just don’t produce any colour.

This also has an effect on the contrast between LCD’s and OLED’s for example, the contrast ratio on the iPhone XR is 1400:1 while that of the XS Max is 1,000,000:1. But these are just numbers on paper, the difference might be noticeable but not as noticeable as you would think on a display as small as 6.1 inches.

OLED produces much brighter and more vivid colours on TV’s and monitor’s but because the technology is new, it is more expensive but its definitely not a deal breaker when going for the iPhone XR.

The other terms you might hear when looking usually looking for a TV( 8k, 4k) just describe the TV’s resolution. Resolution refers to the number of pixels that compose the picture on the TV.

A single pixel, or discrete picture element, consists of a tiny dot on the screen. So 720p screens have 921,600 pixels, 1080p have a little over 2 million pixels, 4k UHD have 8 million and 8k have over 33 million pixels.

8k is still in the future with very few TVs supporting it and almost no content.

4k, on the other hand, is gaining attraction all over the world because streaming services such as Netflix and Amazon have content in 4k. Another reason 4k is popular is due to the introduction of high-end games which when played in 4k are an absolute delight to the player due to better colour quality.

Smartphones such as Samsung s8 and later all have 4k displays. The downside to 4k though is that you need at least a 27” screen size. Overall if you have the money, what is better than watching Netflix in 4k? However, 1080p is still the standard for now and 8k just a glimpse of the future.

I’m pretty sure you might have heard something like 60 FPS at 144Hz is just great for gaming or high-end video editing. Frame rate (expressed in frames per second or fps) is the frequency (rate) at which consecutive images called frames to appear on a display.

A game that requires 60 fps will be shaky and uneven on a 30 fps screen. A higher refresh rate ensures smoother gameplay. So a display with 60 fps at 144Hz gives the ideal experience.

I hope after reading this, the sales guy won’t bully you around when next you go shopping for a new TV or monitor.